Sir Gregory “Greg” Paul Winter, is a British molecular biologist and pioneer of monoclonal antibodies. He further developed techniques (phage display) around 1986 that made such antibodies possible for the first time on a purely human (rather than mouse) basis.Winter was co-head of the Protein and Nucleic Acid Chemistry and Biotechnology Division at the Laboratory of Molecular Biology in Cambridge, and previously deputy director at the Medical Research Council’s Centre for Protein Engineering. In 1989, he was founder of Cambridge Antibody Technology (sold to Astra Zeneca in 2006), which developed the blockbuster drug adalimumab (HUMIRA) (later further developed by Abbott Laboratories). It was the first antibody drug (a tumor necrosis factor inhibitor) on a purely human basis. In 2000, Winter founded Domantis (sold to GlaxoSmithKline in 2006) and Bicycle Therapeutics in 2009. In 2018, he received for his achievements, together with Frances H. Arnold and George P. Smith the Nobel Prize in Chemistry. 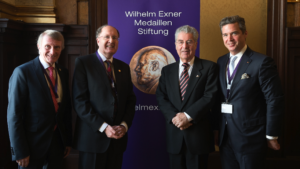