The chemist Johann “Hans” Eibl more than lives up to the idea of the Exner Medal: After chemistry school and chemistry studies at the University of Vienna, Eibl earned his doctorate in 1952. As early as 1948, he had worked at the Serotherapeutic Institute in Vienna (with Prof. Eisler-Terramare as his mentor), the oldest Austrian company active in the field of vaccine production. At that time, sera were derived from horse blood.

In 1953, Eibl and two partners founded the “Austrian Institute for Hemoderivatives,” from which Immuno (acquired by Baxter in 1996; integrated into Takeda since 2019) emerged in 1960 as one of the world’s leading suppliers of plasma products and vaccines. Immuno established Europe’s first plasmapheresis center in Vienna as early as 1966. Eibl’s wife Martha, herself a physician and professor at the Institute of Immunology at the University of Vienna, was Immuno’s clinical-immunological research director. More than 200 patents worldwide are associated with Hans Eibl, and throughout his life he was concerned with improving blood products and vaccines. 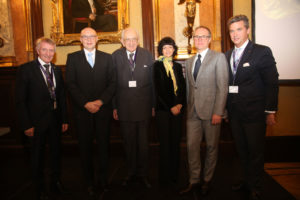