Gero Miesenböck is a neurophysiologist. The Upper Austrian is considered a co-founder of optogenetics, a genetic method to control cellular activity with light. Optogenetics has led to numerous insights into the function of neuronal circuits and to a better understanding of neurodegenerative diseases.

Miesenböck received his doctorate in medicine sub auspiciis Praesidentis rei publicae from the University of Innsbruck in 1991. He then moved to New York, where he became assistant professor of cell biology and genetics and of neuroscience at Cornell University in New York in 1999. In 2004, Miesenböck moved to Yale University School of Medicine (USA) as Associate Prof. of Cell Biology and of Cellular and Molecular Physiology. In 2007, Miesenböck became Prof. of Physiology at the University of Oxford. Since co-founding in 2011, Miesenböck has been director of the Centre for Neural Circuits and Behaviour there. The goal of the CNCB is to understand how intelligence arises from the physical interaction of neurons. 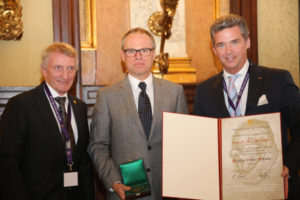