Fabiola Gianotti is an experimental particle physicist who has worked at CERN since 1987. On Jan. 1, 2016, she became the first woman director general there and has been confirmed in her position for another term since Jan. 1, 2021. CERN is the world’s largest research center in the field of particle physics.

Gianotti was involved in the planning and design of the LHC (Large Hadron Collider: particle accelerator) from 1990 onwards and made important contributions to the ATLAS experiment in all its phases. As a spokesperson for the ATLAS experiment at the LHC (investigating mainly high-energy proton-proton collisions), she announced on July 4, 2012, the discovery of the Higgs particle. (or Higgs boson: it is electrically neutral, has spin 0 and decays after a very short time).

As a result of this discovery, she won many awards and also received a lot of media attention. Time magazine named her one of the five most important women of the year. Gianotti plays the lead role in the award-winning documentary “Particle Fever. 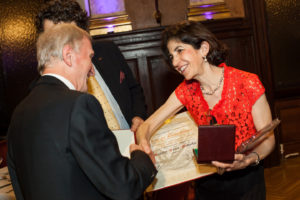